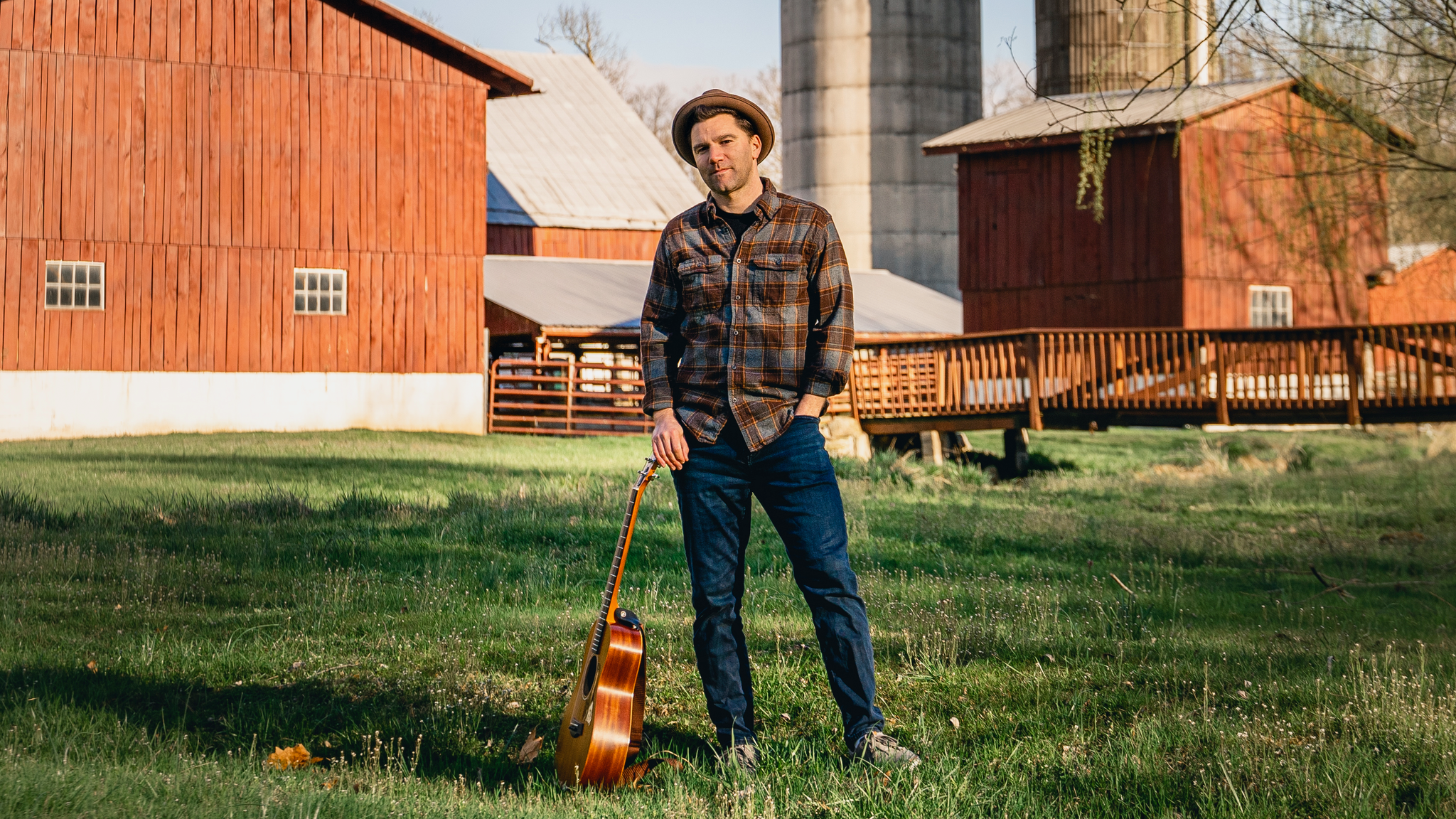 Award-winning singer-songwriter and global citizen Eli Lev’s empathic writing and infectious folk-based sensibility has been his universal passport into our collective hearts.

Over the last five years, the Maryland-based artist released his epic debut, Four Directions, which compiles four conceptual EPs (All Roads East 2017, Way Out West 2018, Deep South 2019, True North 2021) into one 20-song statement. The indigenous traditions he learned during his time as an eighth grade English teacher on the Navajo Nation in Northern Arizona were his inspiration for the critically-acclaimed tune tome. Together, the series imaginatively and intrepidly connects spheres and generations within a body of work that is irresistibly uplifting, emotionally resonant, and down-to-earth authentic.

Eli grew up in the diverse suburb of Silver Spring, Maryland, where a blending of incongruous backgrounds made an indelible impact on his pan-culture perspective. Prior to music calling Eli, he studied in Bloomington, Indiana, taught in the US, and lived in Tel Aviv and Andorra, before returning to the US to get a Master’s Degree in English Education.

Now, Eli is setting out on new adventures. His latest 2022 release, Walk. Talk. Dance. Sing., is an inner travel monologue from the pandemic and beyond. It vibrantly blends Eli’s classic acoustic guitar and upfront vocal aesthetic with refreshingly diverse sounds, spanning pop, lo-fi rock, electronic, indie, folk, and Caribbean-kissed musicality. The refreshing five-song collection compiles his songwriting during the pandemic, capturing the highs, lows, and all the emotions in between during our global crisis. The new EP’s eclectic flair is also an homage to the life-changing power of classic mixtapes, and how a broad array of exposure to new sounds can send someone on a lifelong journey.

“I first got into music when a friend gave me a mixtape in elementary school featuring Bruce Springsteen, Nirvana, The Police, MC Hammer, and U2,” Eli remembers. “It sparked something in me that led me to where I am today, and how I make my living through creating sounds. For the new EP, I just let my emotions dictate the sound and styles of the music.”

Select highlights of the EP include “Be Your Someone,” a Bon Iver-vibing indie-pop song that grapples with the stresses of figuring out how to navigate a love relationship during pandemic lockdown; the breezy, existentially-themed electro-pop track, “Move As You Do;” and the laid back island vibes of “Vacation,” which implores us to treat every day as special with the person we love. Walk.Talk.Dance.Sing. concludes with the soaring sing along, “Singing Along for the First Time,” an exhilarating folk-pop tune elegantly attired with the fiddle stylings of special guest Crosby Cofod. The song’s brisk shuffle beat lends it a taste of Ed Sheeran and Paul Simon. Here, Eli shares the joy over the boundless power of music to be a healer of humanity.

Eli’s releases have earned critical praise from magazines such as American Songwriter, Paste Magazine, and IU Alumni; online outlets including BuzzFeed, CBS Radio, AXS, and The Bluegrass Situation; and have received national folk radio support along with placement on prominent industry Spotify playlists. In 2019, Eli Lev won multiple industry awards for his work: his second album Way Out West won a Washington Area Music Award (WAMMIE) for “Best Country/Americana album,” while his single “Chasing Daylight” won a grand prize in the SAW Mid-Atlantic Songwriting Competitionand in 2021, he won another WAMMIE for ‘Best Pop Artist’ in the DC, Maryland, and Virginia area.

Like classic folk musicians before him, Eli’s real home is the road. He’s played hundreds of shows, locally, nationally, and internationally. Select highlights include performing at the Kennedy Center Millennium stage; his album release at Pearl Street Warehouse in DC; the DC Music Rocks Festival at the legendary 9:30 Club; his appearance at the National Cherry Blossom Festival; and multiple European tours.

“I’m always moving, and that is driven by my desire to connect with people. The joy there is in learning about cultures, and seeing common threads woven into the fabric of our seemingly disparate lives,” Eli says. “Music taps into what is universal; it breaks down boundaries.”

Eli has the distinction of being able to make a living as a full-time musician due to his work ethic and his career savvy. In 2017, he founded Eli Lev Music, LLC, which, despite being a grass-roots business venture, attracts major press coverage and international attention. Eli has also been adept at crowdfunding—he’s conducted two successful Kickstarter campaigns—and he was an early adopter of Patreon. His model and success story have made him an inspirational artistic example, and music coaching companies have taken note. Eli is now a top-level coach and business leader for Modern Musician, a platform that teaches other artists and bands the skills needed to have profitable music careers.

“Someone isn’t going to come by and open a limo door and sweep you away to a great career,” Eli says with a good-natured laugh. “Musicians today should be in control of their destiny, and this should be an extension of their creative process. We can sustain ourselves, but we need the help of a community.”

Eli’s robust but purely grass-roots approach has afforded him the rare opportunity to be a full-time musician on his own terms with the help of his very own music community, “The Levitators.” The Maryland-based artist’s all-inclusive community has grown to thousands of people from dozens of countries across the world and is growing every day. With participatory music videos for songs like “Chasing Daylight,” “Anywhere We Can Go,” and “Dancin’ on the Lawn,” Eli invites his supporters to join along with him in the creative process and share in the joy of collective imagination.

Up next, Eli is walking, talking, dancing, and singing his way on tour to a city near you. Come July 2022, Eli will be hitting the road for a three month cross country tour. He’s also readying his upcoming release project which will include Three Worlds, Two Friends, and One Road.

Reflecting on it all, Eli says: “The most meaningful thing to me is building community through music. The Levitators are my saving grace and keep me going on this journey; I am so grateful for them and already looking forward to our next great adventure together.”

One of the cooler things about Lev’s “four directions” cycle is the fact that each EP shows him exploring a slightly different sound. Raised on the East Coast, All Roads East indulges in his alt-country and Americana roots. Way Out West takes on more of an indie-folk element. Deep South, naturally, looks at the marriage between folk, rock and pop which illuminates so much classic American music. True North, fittingly, gives Lev space to show off his intimate, singer-songwriter side, which is evident on “I Wanna Tell You.

Eli Lev shines a sonic flashlight into his listeners ears to illuminate their brain cells with sheer joy and positivity on his new single, ’To the Stars’. Fundamentally feel-good, Lev makes use of familiar upbeat melodies and a full folk pop sound giving the track a contemporary feeling without losing itself in a web of “sounds like” contemporaries

- When the Horn Blows

With his latest single, “Dancin on the Lawn,” indie-folk singer-songwriter and free spirit Eli Lev delivers an instant pick-me-up that’s guaranteed to chase away even the deepest blues. The catchy, upbeat track envelops the listener, capturing the joy and resilient spirit of humanity. It serves as yet another reminder of why growing global audiences consider Lev among the best of the D.C. creative scene

Eli Lev explores the role of ritual and joy in his new solo cut, with ‘Dancin’ On The Lawn’ bristling with happiness. An up tempo, upbeat number, Eli Lev’s rounded approach to melody seems to exude joy from each note.